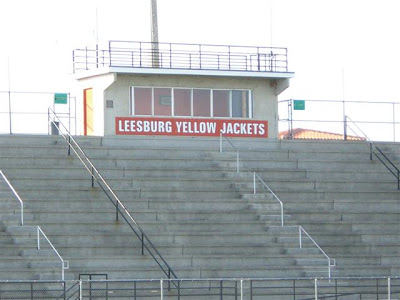 Next Year's Jackets displayed a lot of potential


By WAYNE STOKES Sports Editor May 29, 1970 The annual spring-windup Varsity-Senior football game is now history and the varsity looks like the really fine team everyone suspected they could be. Going against a senior ball club hurt considerably by the loss of All-State quarterback Mike Napier, the varsity consistently ripped off large chunks of real estate, both on the ground and through the airways. One thing established early in the muddy going was that Coach Lofton has a fine pair of running backs in Tommy Ryan and Hovie Guthrie. Showing a lot of determination and drive, both hard-chargers showed good running ability and in the inclement weather during most of the game, exhibited good ball handling. This phase of the game had to be pleasing to the Jackets' coaching staff, as very few mistakes were made by the upcoming varsity. The ball game started with Kenny Mitchem reeling off a good gainer for the seniors. This drive attempt was choked off on the next play by a fumble that was recovered by the seniors.

Dandy Andy Carlton, at the helm, handed off to Hovie Guthrie on an off-tackle slant that was stopped for a yard advance. Tommy Ryan got the nod on the next carry and Ryan burst off the right side for 14 yards before being halted. This gave the varsity their first down of the game. Three running plays, with Ryan picking up eight yards, gained another first down for the varsity. Hovie Guthrie ripped through on a trap play and sped 15 yards before he was knocked down inside the 15 yard line of the Seniors. Ryan picked up three on first down and the next play was busted and wound up losing five. Carlton's first pass of the ball game went over the head of Guthrie incomplete. With Sherrill Lackey at the quarterback spot, the senior offense never got cranked up in the first half, with most series losing yardage under the fierce pursuit of Leon Scott, Lynn Gilbert, and the rest of the hustling defensive team. With Guthrie and Ryan rolling up considerable amounts of real estate between the twenty yard lines, the Varsity found it was tough to get past their more experienced foes' goal line. At the end of the first quarter, the score remained 3-0 in favor of the Varsity. A downpour encompassed the entire first period and the field was a quagmire as the action headed into the second period. On the Seniors first series of downs in the second period, three plays found them trying to move from behind their own goal line. Kenny Mitchum was finally tackled in the end zone for a safety. In the next Varsity series, Tommy Ryan picked up a first down land jackets were knocking on the door again. A fifteen-yard penalty however, stalled this drive and the Seniors took over. Ronald Pelham took over at quarterback for the Seniors and it took awhile before he got cranked up and in the groove. Three straight passes dropped incomplete and the Seniors had to kick. Taking over on their 49, Hovie Guthrie clicked off seven over left tackle on the first down play. On the next play, Andy Carlton dropped back and hit little Tim Wesley over in the left flat and Tim raced away from his defenders for a 44-yard touchdown. This should be a potent combination next year. The extra point kick was good and the Varsity led 12-0. Ronald Pelham finally connected with Greg Williams and the 1969 All-State flanker picked up the first down of the game for the Seniors. Time ran out in the half before the Seniors could muster a scoring drive. After halftime, it was too much of the Varsity running game, mingled with Carlton's passes, for the Seniors to handle. Ryan and Guthrie picked up where they left off in the first half by ripping off yard after yard for the Varsity. Jerome Kerrison made several nice catches during the second half to spark the Varsity passing game. He and Wesley should make a dangerous twosome for Yellow Jacket foes of the future. The third period ended with the score holding at 12-0. Six carries into the fourth quarter, hard driving Hovie Guthrie bulled over from one yard out to give the varsity six more points. The kick attempt was blocked and the Varsity now led by 18-0. On the next series of downs for the Seniors, Ronald Pelham sparked his team toward what looked like a possible score. Irwin Crummer reeled off seven yards of tackle and Pelham connected with Tony Hart for a 30-yard beauty, before the drive stalled when Pelham dropped the wet football. This gave the Varsity the ball and into the game came Gene Elton at quarterback in place of regular Andy Carlton. Elton was initiated very rudely into the football wars, losing considerable yardage in his first game experience at the slot. Nervousness played a big part in the missed play connections on the first series Elton guided, but he settled down considerably on his next set. The rest of the muddy game was spent in a desperate attempt by the Seniors to shake Greg Williams loose for the bomb. On one play on the left side, Greg almost broke all the way, as he flashed his still familiar open field style. The game ended with the Seniors knocking on the Varsity door but it would not budge and the final score read 18-0 in favor of the Varsity. After the game was over, we asked head Coach Wilbur Lofton There are areas that still need a lot of work, but the potential is there for another good football team. One youngster that was very impressive was Leon Scott. Scott showed exceptional speed for a lineman and had an instinct for the football. He was usually around when a tackle was made: All in all, it looks like the Jackets have had a very successful spring practice. 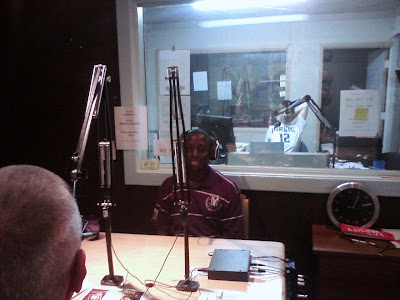 Gerald is the CEO/President of Lacey LLC and OmariWholesale, Inc. He runs his entire business from his home where he is able to spend quality time with his family and friends. He is passionate about helping individuals to build and monetize their personal brand online.
Posted by Gerald Lacey at 3:26 PM